Sonoratown is the brainchild of Teodoro Diaz-Rodriguez, Jr. and Jennifer Feltham—two veterans of the service industry with 27 years of combined experience. In 2016, they decided to open a restaurant that would pay homage to the small border town in Mexico where Teo grew up and also their beloved neighborhood of Downtown Los Angeles. Downtown had been home for six years at that point, and it was time to help define what the revitalization of the neighborhood would look like...

The project would be named "Sonoratown" which was the name of a small community of Mexican immigrants who settled in the area we now know as Chinatown, after the Gold Rush in 1850. The restaurant idea was simple: serve tacos in the style of San Luis Río Colorado, Sonora—a part of Northern Mexico known for having the most delicious carne asada—cooked over mesquite wood fire—and also for truly excellent handmade flour tortillas.

Opening a new restaurant isn't easy, especially in the hyper-saturated market of DTLA and so Jen and Teo kept their expectations low and opened the doors, knowing full-well failure was a distinct possibility. To their surprise, the people of the Fashion District neighborhood took to the idea immediately. Office buildings full of people were tired of the same scant lunch options. Lines quickly generated more buzz and longer lines—and the tiny taco counter was featured in the first three months by Eater, Los Angeles Times, and Los Angeles Magazine. These publications praised the restaurant for having a small but well-executed menu, friendly staff and a community-oriented focus.

Jen and Teo are opening a second location in Mid-City on May 31st, 2022! Find the second outpost of their beloved taqueria on the corner of Hauser & San Vicente! 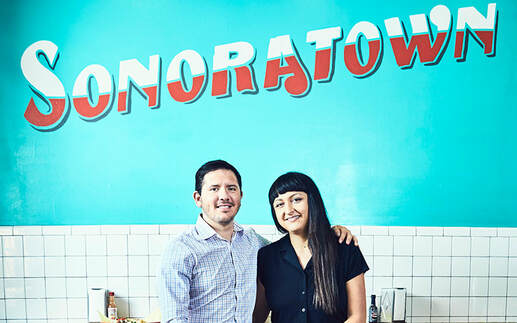